Why Would a Guy Write About Sexual Assault?

A few weeks ago, after getting a flat tire in the rain, I had the opportunity to talk to a tow truck driver while being driven to get a new tire. The conversation turned to what I do. I told him about Reinventing Hannah, which is about a 16-year-old girl who struggles to shed her shy, quiet persona and become an advocate for herself and others after she is sexually assaulted.

He said, surprised, “YOU’RE writing that?”

It took me a minute to process his shock. Then I realized that he probably didn’t know I was transgender and/or didn’t think guys would write about sexual assault.

It’s a question that I’m sure will come up over and over, in different ways. Underneath comments like that I think is another question:

Can a man write effectively and authentically about sexual assault rather than reinforcing stereotypes about women?

I’ve seen lots of tweets suggesting men shouldn’t write about rape. The reasoning behind most of these tweets is that many men don’t do a good job of it. The well-intentioned ones often write rape survivors as eternally broken or defined by the rape, while others — while by intention or design — glamorize or minimize sexual assault instead of treating the issue seriously.

There’s also the feeling that sexual assault is a “women’s issue” and that men shouldn’t speak for women.

These are questions I’ve struggled with as I’ve written and rewritten Reinventing Hannah. This story is one that speaks to me and one that I was driven to write for a couple of reasons.

This story is personal.

I’ve never been roofied (thankfully), and never suffered a full-on rape, but when I was in high school and my transition was light years off, I was a “girl” with a large chest and there were boys in school who thought it was okay to touch my breasts while I was at my locker. The first time it happened, I told a teacher, but the boy in question said it was an accident and apologized. Of course, it kept happening, and I stopped going to my locker.

It’s not something I think about or talk about a lot, but it wasn’t cool that any of that happened and one of the reasons I wanted to write this book was to say that this kind of shit happens a lot and is never okay.

Hannah’s story is personal to me for other reasons, too. I have a whole subplot going on about a sarcastic science teacher that makes her feel less than because she’s a girl, and that was something that happened to me in high school, too. Her love interest, Brad, is partially based on a guy I had a crush on but was scared to pursue in high school, too.

Which brings me to my next point.

This story is not just about sexual assault.

One of the big problems I mentioned above is that many rape stories, particularly those written by men, suggest that their character’s sexual assault defines them.

I’ve never seen Hannah’s story that way. Reinventing Hannah is about a teenage girl who is raped, not about a rape survivor who is a teenager.

Hannah has a full life and identity outside of what happens to her at a party. Throughout the story, she struggles with figuring out who she wants to be and with letting go of being the overly quiet person her friends expect her to be. She also navigates other aspects of her life:

All of these issues are colored by what happens to Hannah, but she’s not defined by her sexual assault even though she struggles mightily when it first happens.

I don’t make a big deal out of being a trans guy because I don’t want people to read my books BECAUSE I’m transgender. I just want to be a guy who happens to be trans.

But in this case, it makes a difference.

I was raised as a girl, treated as a girl, expected to grow up to be a woman. Part of Hannah’s story is my story.

I tried hard to be the woman everyone thought I was going to be. I was angry all the time, partially because that wasn’t who I was and partially because too many people in this world treated me as less intelligent and less worthy, because my feelings and thoughts were often dismissed as “women don’t make sense,” because strangers flirting with me made me uncomfortable and people didn’t see what the big deal was.

I may have figured out my gender identity a long time ago, but seven years after transition, those feelings and memories are still very much with me.

Hannah is the woman I would have been if I’d been born a woman rather than a trans guy. Like her, I didn’t know how to express myself and went back and forth between too quiet and too angry. Unlike her, I didn’t figure it out until my teen years were long past me.

Male depictions of rape and of women in general can be problematic. There’s more than enough badly written fiction out there to prove that.

But it’s so much more than “men can’t write about women’s issues.” That’s not true, and more to the point, rape isn’t just a women’s issue.

There are men who get raped and men who want to be better allies to their female friends.

Reinventing Hannah is for them as much as it is for women, even though girls and women are more likely to pick up a book about a young woman learning to use her voice than boys and men.

The Bottom Line: This is my story.

I wrote this story because it spoke to my heart like no other and I hope that it is as meaningful to readers as it is to me.

I put a lot of myself into this story, a lot of memories of my own high school experience and my wish that things had been different for me than they ended up being.

I hope it’s empowering for readers. I know it’s authentic. I worked hard to tell my truth as best as I could and I think that truth will resonate with people regardless of my gender identity. 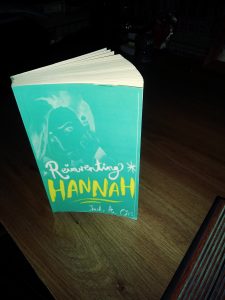 Reinventing Hannah comes out on April 11, 2020. It is the story of a sixteen-year-old girl who struggles to reinvent herself into someone unafraid to speak her truth after she is date raped at a party she attends to protect a friend.

Jack A. Ori writes about young people dealing with tough issues such as mental illness, violence, and prejudice. In addition to Reinventing Hannah, he is the author of Mama’s Illness, a short story about a six-year-old girl dealing with her mother’s hospitalization for suicidal ideation.

Jack is also a staff writer for the online TV magazine TV Fanatic, a full-time freelancer, and a life coach who helps empower young adults to live life on their own terms. He currently lives on Long Island, New York, where he plays violin with a local orchestra in between writing sessions.